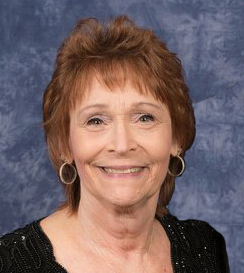 Sandra Kay Hall Lavender, 65, of Irving, Texas, went to be with the Lord surrounded by the love of family and friends, Tuesday, August 6th, 2019, at a hospital in Dallas, Texas.  Services will be 10:00am, Monday, August 12, at First Baptist Church of Hewitt, Texas with Rev. Zachary McIntosh of Concordia Lutheran Church of San Antonio, Texas, and Rev. Luke Madsen of Immanuel Lutheran Church of Belton, Texas, officiating.  Burial will take place at Robinson cemetery and a celebration of life will follow at Downsville Baptist Church in Robinson, Texas.  Visitation with the family will be 2:00pm to 4:00pm, Sunday, August 11, at Waco Memorial Park Mausoleum Chapel.

Sandra was born in Waco, Texas, the youngest child of Lloyd Dwight Hall, Sr. and Gladys Lucille Betz Hall.  She grew up and was educated in Waco, having attended Cedar Ridge Elementary, North Jr. High, and graduated in 1972 from Waco High School.  An advocate and example of life-long learning, she received a Secretarial Certiﬁcate from McLennan Community College as part of the class of 1973, and was awarded degrees from Austin Community College in Administrative Assistant Specialization in 2004 in addition to a Medical Specialization and Human Resources Specialization in subsequent years.  Sandra married her high school sweetheart, Ronald Lee Lavender on September 29, 1973 and last year celebrated 45 years of marriage.

Sandra was loud, proud, and wore her heart on her sleeve in everything she did and with everyone she encountered.  Whether she considered herself as much or not, she was the ringleader of our family, always ensuring everyone was accounted for and taken care of, and always eager to welcome anyone into our family.  To be an acquaintance of hers was to be a friend; and to be a friend was to be fully integrated into our family.  She would have it no other way and she enjoyed having an enormous family.  Only one thing did she ever count as greater than her family, and that was her unconditional love and faith in Jesus as her Savior and Lord.  Sandra came from a family of church elders, pastors, and church planters and continued that legacy as a church musician for decades.  Sandra faithfully served as a pianist and organist at Downsville Baptist Church in Robinson, Texas, Northview Baptist Church in Austin, Texas, and Milwood Baptist Church in Austin, Texas.