You can leave your own memories of Alan by using the 'Post Comment' button at the bottom of this page.

Once, when I was at UT in the late seventies, I was driving up from Austin to Waco and heard a Georgetown radio dj named Alan McCutcheon, and he sounded just like the Alan McCutcheon I remember from North Waco Elementary. So odd, that I would recognize that voice after a couple decades. 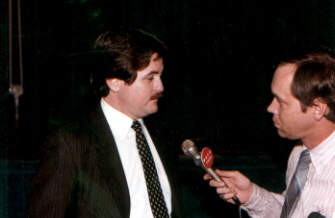 I did an image search and this 1986 picture sure looks like him.

He's interviewing Vic Feazell, who was McLennan County District Attorney at one point.

So it looks like Alan ended up in broadcast journalism.

Bob McGregor remembers him as a broadcaster for WACO radio, 1460 AM.

The first/middle name was the key in discovering the following: